logo
United Diocese of Cork, Cloyne and Ross > Tourists > Worth a Visit! > Teampol na mBocht ~ ‘Church of the Poor’ built during the Great Famine in 1847 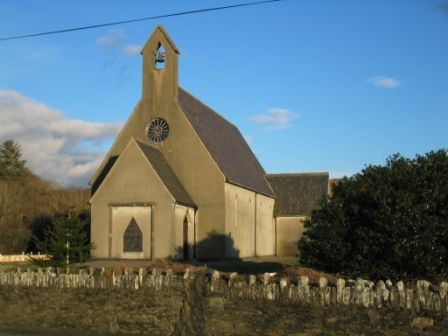 Find us on the Worth a Visit – Tourist Map

The only Church of Ireland church with an Irish name.

Altar Church, beside Toormore Bay on the Mizen Peninsula, near Ireland’s southernmost point, is also known as Teampol na mBocht, the Church of the Poor.

Altar Church, beside Toormore Bay on the Mizen Peninsula, near Ireland’s southernmost point, is also known as Teampol na mBocht, the Church of the Poor.

The potato crop, which then provided the staple diet of poor people in Ireland, first failed in the autumn of 1845.  There was hardship and, when the blight struck again in 1846 and 1847 there was catastrophe.

During Black ’47, The Illustrated London News reported that in the village of Schull, five miles from Toormore, an average of 25 men, women and children were dying every day of starvation, dysentery or famine fever.  At nearby Cove, the population fell from 254 in 1841 to 53 in 1851.

In Toormore, however, over the same period, the fall was relatively slight – from 370 to 343.  Why this was is not known, but some believe that one factor was the relief work done by the Rector of Kilmoe, the Revd. William Allen Fisher.

As the crisis deepened, Fisher begged for help from well-wishers both in Ireland and England.  Money came.  Like many other priests both Protestant and Catholic, Fisher set up soup kitchens and distributed food, medicine, blankets and clothing.  But he wanted to do more than dole out charity.  A man of his time, firmly believing in the dignity of labour, he wanted to provide paid work.

According to his son-in-law, Fisher ‘asked for and obtained the permission of some of those who had made him their almoner’ to use the gifts on a building project.  This was originally to have been a new schoolhouse but, as more money came in, Fisher embraced a more ambitious plan, the building of a church for the townlands of Toormore and Altar.

The building was begun and apparently completed in 1847. Tradition has it that, in order to employ as many as possible, without benefiting the less impoverished farmers, no carts or horses were to be hired.  The stone was quarried nearby and carried to the site entirely by hand.  As Fisher wrote in a report on the church, ‘the employment was given chiefly by contract, so that the poor were able to work about their cabins, fishing etc. at the same time that they earned a subsistence for themselves.’

Fisher called it ‘The Church of the Poor” because it was the poor people who built it.  He loved the Irish language, in which he was so expert that the British Museum would send him ancient manuscripts for translation.  This is why Teampol na mBocht is the only Church of Ireland Church to have an Irish name.

Plenty of parking.
No admission charge, but donations gratefully accepted.
No shop or souvenirs.
Wheelchair friendly.
Toilet facilities, but with difficulty for disabled.