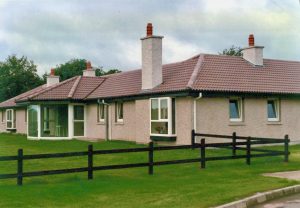 The Revenue exemption, CHY number is: 548

Each unit is completely independent and self-contained, accommodation consisting of entrance hall, sitting/dining-room, kitchen, bathroom and w.c. and one or two bedrooms (nine of the units contain two bedrooms). Equipment includes fitted cupboards, wardrobes, etc., electric or gas cooker and refrigerator. Heating is by gas, with coal-effect fire in the sitting room, and radiators throughout the house. The buildings are fully insulated and double-glazed, and storage space is provided for each unit. There are communal laundering and drying facilities, a community room and workshop for the use of residents, as well as a guest room for use by residents’ visitors. The grounds are fully landscaped, but there is space for residents to cultivate their own small gardens if they wish. There is adequate parking space for residents’ and visitors’ cars. The Trustees are responsible for external maintenance of the buildings, while residents are required to maintain the interior of their own houses. Residents are also responsible for the cost of heat, light, telephone, insurance of their own furniture and effects and any other personal expenses.

There is a resident Warden, who has general oversight of the property and grounds and who is available to assist residents with any minor problems which may arise concerning their houses or general welfare. There is an alarm system in each house connected to the Warden’s office for use in case of any emergency. Each house is fitted with smoke detector alarms which are connected in a similar manner.

Medical or nursing facilities are not provided by the Trust, and should any resident’s health deteriorate to the point where constant nursing care is necessary, the Trustees would expect that he/she would move to a nursing or medical establishment as soon as a place becomes available.

Financial arrangements are fixed in each case by the Trustees and are based on individual circumstances. Where prospective residents own property or other substantial capital assets, they may realise these and make an interest-free loan to the Trustees, to be repaid – less deductions – when occupancy ceases. Such loans, the amount of which is fixed by agreement in each case, are invested and the interest used towards the running expenses of the establishment. Alternatively, if prospective residents do not possess any capital assets, they will be asked to pay a monthly service charge, based on individual circumstances.

Where two people, e.g. husband and wife, brothers or sisters, have been allocated a two-bedroomed unit, on the demise of one, the survivor may be required to move to a single-bedroomed unit as soon as one becomes available.

Under the terms of Lapp’s Charity Trust, accommodation at Lapp’s Court is available to members of Protestant denominations, and their spouses.