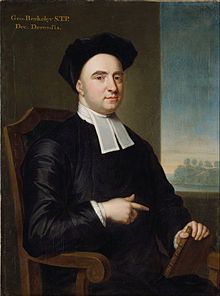 George Berkeley was Bishop of Cloyne from 1734 until his death in 1753.

The city of Berkeley, California was named after him. His name is also given to Berkeley Divinity School (an Episcopal seminary) at Yale University and to the Berkeley Library at Trinity College, Dublin.

Berkeley was born near Thomastown, Co. Kilkenny in 1685.  He attended Kilkenny College and Trinity College, Dublin.

His first work, on the subject of mathematics was published in 1709: Essays Towards a New Theory of Vision. He was ordained in 1721 and served as Dean of Dromore and as Dean of Derry.  In 1725 he undertook  a project of founding a seminary in Bermuda.

He travelled to America in 1728, landing at Newport, Rhode Island where he set up home and awaited funds for his Bermuda enterprise.  When the funds were not forthcoming he returned to England in 1732.

His primary writings were philosophical including the setting forth of immaterialism or subjective idealism.