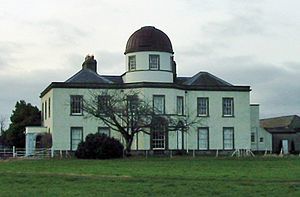 John Brinkley (c.1763-1835) was born in Suffolk, England and was educated at Cambridge.  In 1792 he became the first Royal Astronomer of Ireland on appointment as the Andrews Professor of Astronomy at Trinity College Dublin and Director of Dunsink Observatory, near Dublin.  He was a noted astronomer and scientist, serving as President of the Royal Irish Academy (1822-35) and of the British Astronomical Society (1831-33).

Brinkley was ordained in 1791 and served as Bishop of Cloyne from 1826 until his death in 1835.  A fine memorial to Bishop Brinkley can be seen in Cloyne in  the Cathedral Church of St Colman.