United Diocese of Cork, Cloyne and Ross/Our Story/Centenaries and Anniversaries/2016: The Easter Rising and the Battle of the Somme/

2016: The Easter Rising and the Battle of the Somme

Here is the Diocesan programme of commemorations of the centenary of 1916.  All are welcome at all of the events. 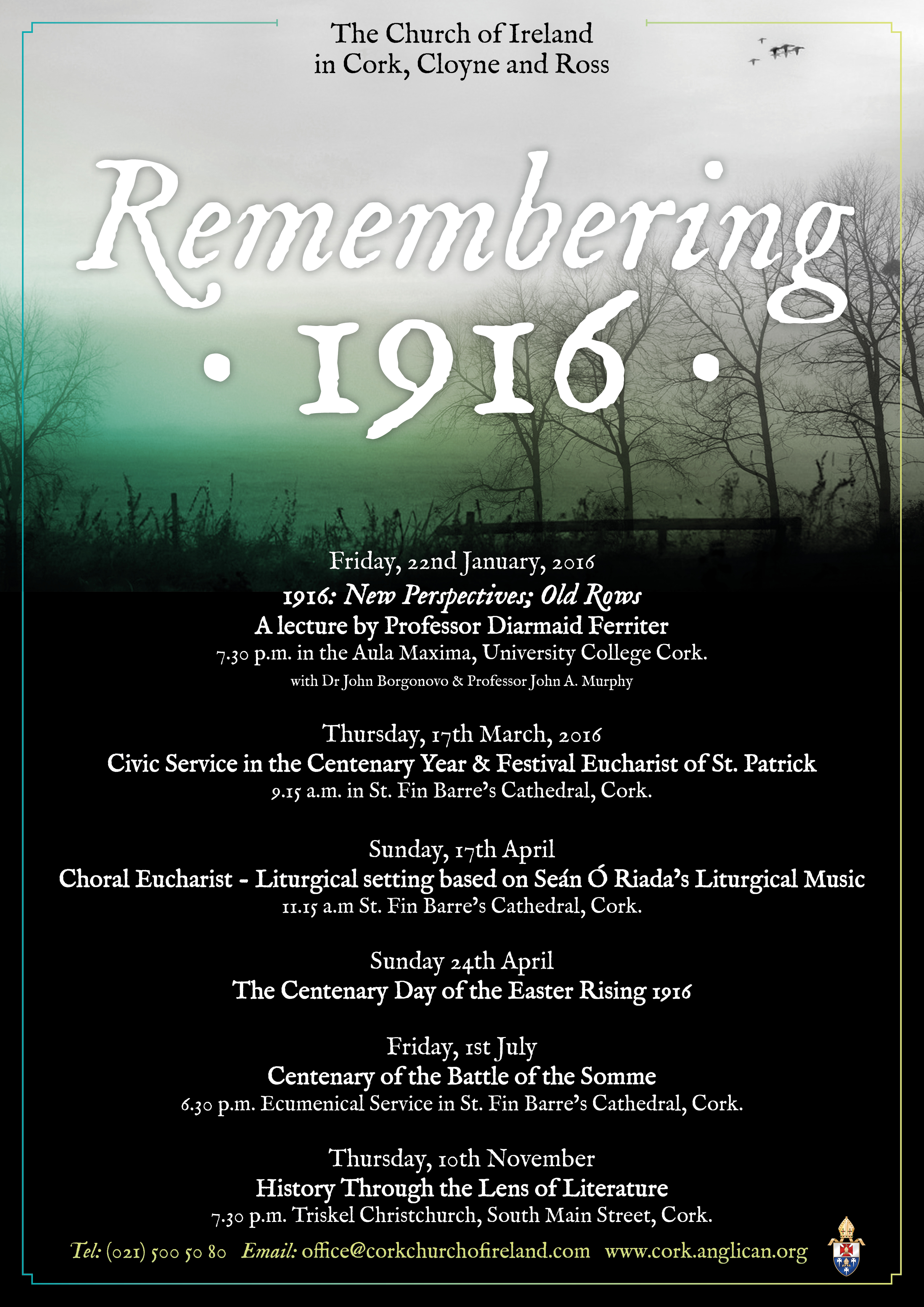 Here also, is the Preface to the Liturgy, prepared by the Church of Ireland, to commemorate the Easter Rising 1916:

Remembering the events of 1916:

As the commemorations of events one hundred years ago continues, recalling the stories and tragedies of the years 1914-1918, this service focusses on the Easter Rising (24 to 29 April 1916), and the executions that followed in May.

The casualties in the Easter Rising are difficult to count. The British Army reported 116 dead, 368 wounded and nine missing; 16 policemen died and 29 were wounded; 318 rebels and civilians were killed and 2,217 wounded – although the last figure has never been divided between rebels and civilians. All 16 policemen who were killed and 22 of the soldiers killed were Irish.

We should remember too that the majority of the casualties, both dead and injured, were civilians, and most of the civilians who died were killed by indirect fire.

The commemorations of the events in 1916 are often politicised and divisive. Yet, in the wider context at Gallipoli, in Easter 1916, and at the Somme, people from both parts of the island and from both traditions fought side-by-side, suffered together, and sustained, encouraged and cared for each other. Wherever they fought, on whichever side they fought, or whether they were non-combatants, the majority of those who suffered and died believed they were shaping and making a new Ireland that would value peace and justice.

Those who supported the Rising shared hopes for “the happiness and prosperity of the whole nation and of all its parts, cherishing all of the children of the nation equally, and oblivious of the differences … which have divided a minority from the majority in the past.” (1916 Proclamation of the Irish Republic)

In remembering the events of one hundred years ago, the Church must give voice to shared suffering, silenced and untold stories, the many and nuanced narratives, bravery and heroism, and commitment to ideals that were underpinned by shared and common aspirations. How we design and structure our commemorations can restore these hopes they shared for future generations. Confession and thanksgiving, in the proper proportions and in creative tension and balance, can help achieve this.